Yes, Billy, make another one of your inept, clumsy play on words.  Your siblings are oblivious to them, but old people throughout the U.S. will chuckle and nod, “That Billy! What a card!”

No, she’s not called Grandma because it’s Grand when she’s around.  However, I have to give you credit for your increased vocabulary. (Your sibs will still be oblivious, however…) 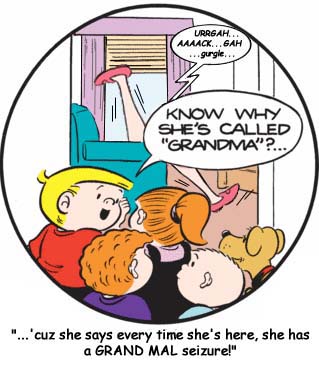 This is just like the upcoming movie XMen Origins: Wolverine, only without Hugh Jackman.

Hey, wouldn’t Hugh Jackman make a great Rex Morgan (no, not in his Wolverine persona!)?

Comments Off on Soap Strip Origins: Sarah Morgan
Grab your #2 pencils, kids!
By bats | - 3:48 pm
Posted in Category: Finger-pointing Goodness!, Most maryWorthy, PSAs and Extravaganzas!, Trust Me, I'm a Doctor

Here I was, doing a one-time funny with wacky, wacky road-rage possessed drivers.  Hey, it’s funny, and it’s a one shot deal. Right?

Oh, how wrong I was!

Mark and Cherry both speculate that the men who stole your camera might be bad guys.  I don’t think that either of them go about blithely and consider the general public a Mongol horde, so what possesses you to vigilante action, Rusty?

Why don’t you just run home and tell Mark and Cherry where the men are, Rusty?

Or are you just as greedy and conniving as those men, Rusty?

Maybe you don’t deserve to be the Trails’ adopted little boy.  They’re good, upstanding members of their little woodlands community, Rusty.  Can you ever hope to measure up to them?

Probably not.  The greatest service you’re ever likely to provide to Lost Forest is as a breakfast for a grizzly one cold April morning.

Comments Off on Rusty, we’re letting the Keanes adopt you…
Happiness Is…Different Things to Different People
By bats | - 5:49 pm
Posted in Category: Trust Me, I'm a Doctor

The tenacious and aggressively insightful June finally breaks Sarah.  Just as she has with Rex, Gretchen, Abby, and countless others…but, is it worth it?

Are you really happy, June?

On the other end of the spectrum is Rex.  It’s the little things in life that make Rex happy.

Comments Off on Happiness Is…Different Things to Different People
No capes.
By bats | April 17, 2009 - 6:26 pm
Posted in Category: Cameo Appearances, Trust Me, I'm a Doctor

(I do like CC’s Little Guy, in response to June’s aggressive interrogation (and even more aggressive removal of her sunglasses) ask, “Did I just hear Roger Daltrey screaming in the background?”. This is ringing all sorts of alarm bells, isn’t it?)

Here’s the original as a reference:

And here’s the mashup (you’ll have to add your own Horatio Caine):

…well, maybe when the Croccos are booted off the ship relocated to their safe new habitat, the Captain can have the Star of India‘s hold fumigated.

But back to suspicious old June.

Poor Rusty! You just know what’s going to happen to him when the bad guys discover him.

The sad thing, Rusty, living out in the middle of nowhere (i.e., Lost Forest) has his own little fantasy life, complete with speak-out-loud narrative, that makes him rather delusional and really isn’t going to help things…

Comments Off on Not the superhero type
Chance at a normal life, Take Two
By bats | April 13, 2009 - 3:38 pm
Posted in Category: I Smell Something Funky

With apologies to the memory of Marcel Marceau.

Comments Off on Chance at a normal life, Take Two